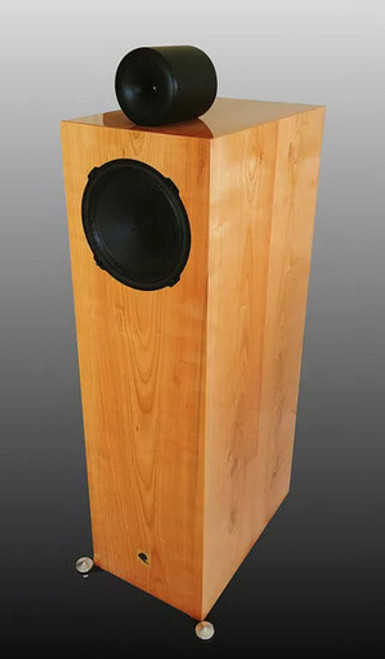 The Z Series loudspeakers from Aurai are the latest design from Alian Pratali's passion project. They continue to use what works so well in Aurai's Classic Series, but add to their performance in some very unique ways. The Z Series loudspeakers share the same low mass, custom tuned HF driver in a machined Delrin horn that earned Aurai so much praise.  Like the Classic Series, the Z Series Lieutenant is constructed out of 24mm thick Finnish Birch plywood instead of MDF. This offers greater stiffness and control over resonances than MDF. The Smaller enclosure of the Z84 is also more resistant to the colorations of a wood box. Last, they share the same high quality wiring, binding posts and internal components as the award winning Classic Series.

"First impressions? "What an incredible tweeter!"...This was one hellaciously fast and responsive HF unit. It dug deep into the finest upper harmonics...This unknown French tweeter was superior to the far heavier but famous Mundorf AMT in our regular monitors. It was superior to the inverted ceramid Accuton dome in our Albedo Aptica Two-way towers. It most reminded me of a Raal ribbon, albeit with a higher energy density and more color...I thought this dome tweeter to be second only to Michael Borreson's high-tech, ultra-costly ribbon which I'd heard in this room the year prior..." - Srajan, Sixmoons

Where the Z Series differs from the Classic is the use of a Supravox full range driver (9" or 11") tuned to be used as a midrange that covers 65hz to 3500hz. The Supravox is loaded in what is called a TQWT, or Tapered Quarter Wave Tube that is open at the back of the enclosure. This is also why the enclosure on the Z84 is so deep. The TQWT gives the Z84 a boxless, open baffle type sound that covers the full range of the human voice. There are also gains in efficiency made with the Supravox driver, making it a more reasonable to mate with tube amplification. 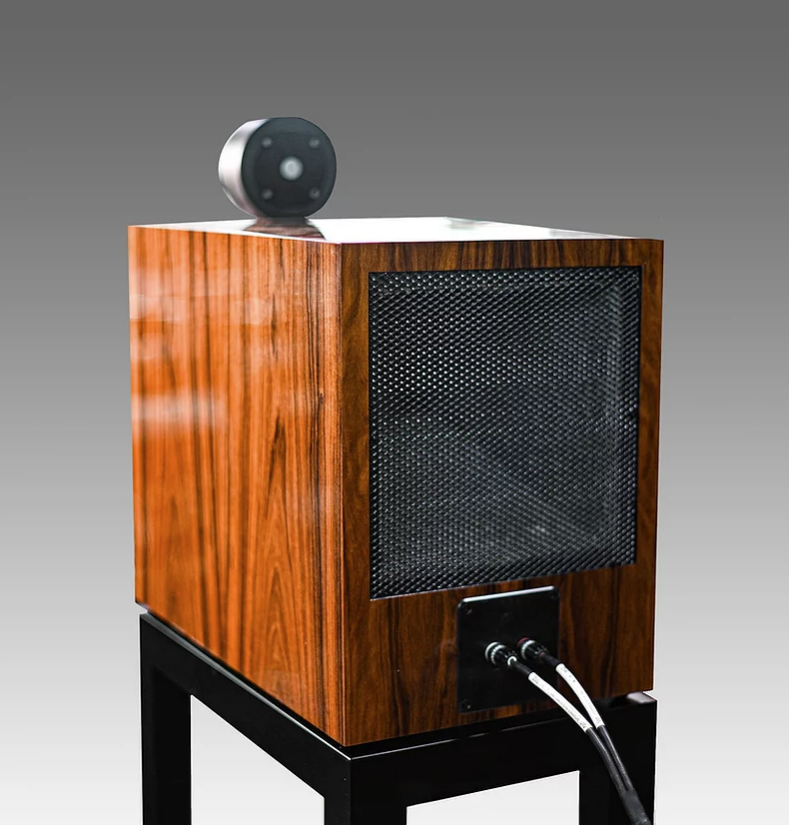 The Z Series horn loaded high frequency driver sits atop the enclosure rather than mounted on the front baffle. It is fully exposed so as to minimize diffraction effects. There is also a dipole option for the HF driver that puts two of them back to back. The dipole option creates a more full range dipole effect, and a more spacious presentation overall.

The Z84 is the monitor version, as it is designed to be mounted on the included stands, with no bass module. It has all of the advantages of a monitor: A small box that is more impervious to coloration, a better "disappearing act" from the smaller enclosure, and greater flexibility with tuning and placement.

This speaker was chosen for our showroom because we already have a fantastic pair of open baffle, servo controlled subwoofer towers that blend harmoniously with the Z84, match the speed of the monitor, and load the room identically. This setup also allows the Z84 to run at a full 96dB efficiency, whereas the Lieutenant runs at 93dB so that the supplied woofer is not drowned out by the efficiency of the main drivers. We also chose this speaker because it is a stand mounted monitor design with a very small sonic profile. It tends to "disappear" a little more. Additionally and practically, the Z84 is lighter and costs less to import from France. 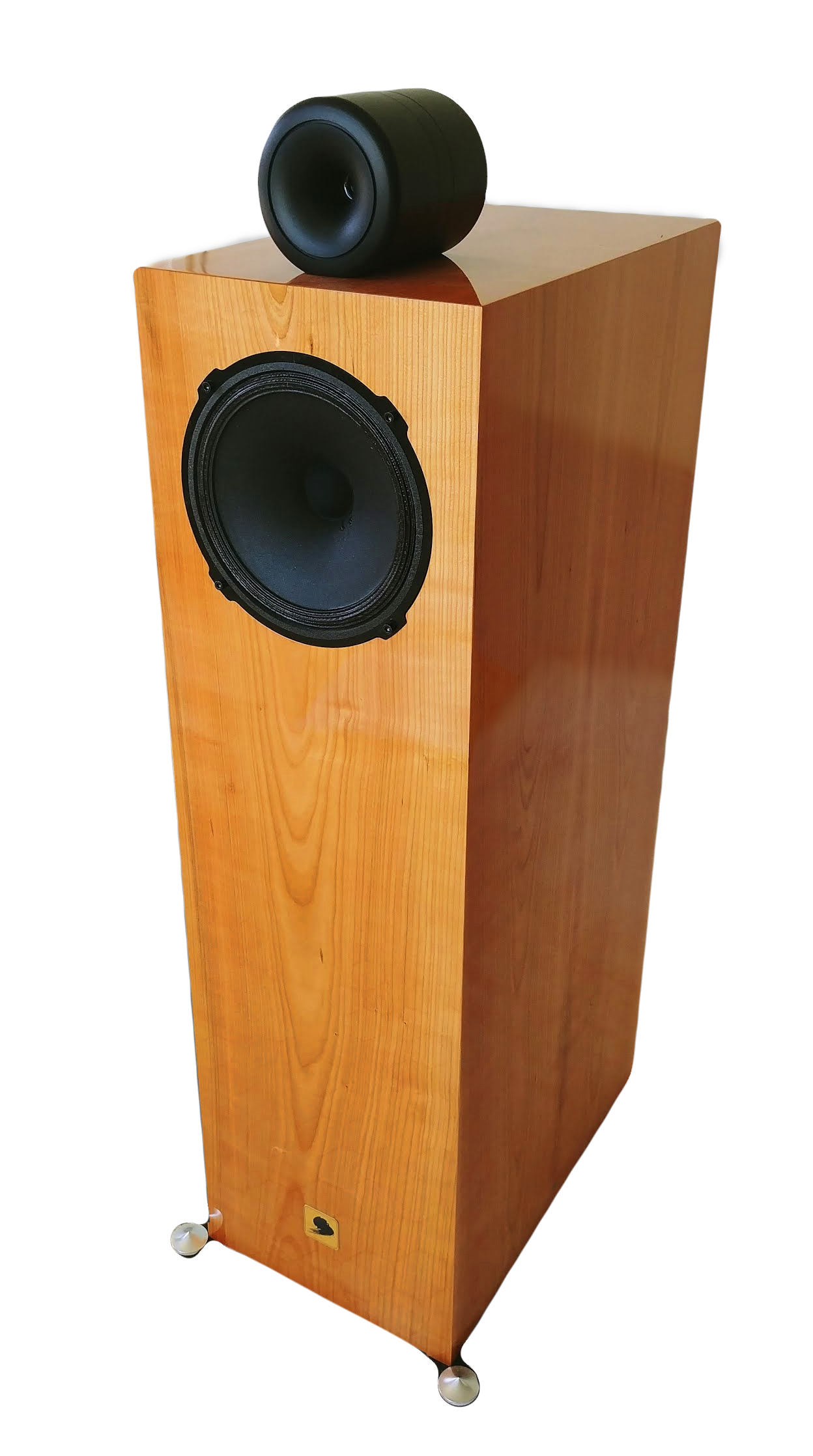 The larger 285mm has a sumptuous low midrange, and the upper midrange is soft and liquid. The 245 is faster, which makes is slightly more analytical with low midrange, and more presence in the upper midrange. Alain and I both prefer the 285mm. The larger driver necessitates a larger enclosure, and is more costly.
Dipole HF: One can choose to have a front facing Horn loaded HF driver only, or have two of the HF drivers placed back to back in a dipole configuration. The dipole configuration works well if you can place the speakers out from the back wall. It gives more air an spaciousness to the presentation.

"...It brings us full circle to my earlier comments about next-level resolution. Compared to our usual transducers which include Audio Physic Codex and German Physiks HRS-120, Lieutenant dug down deeper into a tone's harmonic layers. This wasn't about so-called 'big-tone'a la 6SN7 triodes. That's fatter thus slower and darker. Lieutenant was trim and muscular but with that inside-out harmonic radiance a bit like charisma. This was a quick sound which still managed to do a heavy tractor's tilling job. It turns soil to get parts not usually exposed up to the surface.Dark nutrient-rich earth sees the sund and light and darkness coexist. It's a lyrica way of dexcribint a sound that was both fully developed and fast..." - Srajan, Sixmoons.com

In general, 2-4 dipole servo or sealed box subwoofers are recommended. This is a fast, resolving speaker that deserves fast, resolving bass. Our highest recommendation goes to the GR Research Sealed Servo Subwoofer Kits. These require assembly, and they offer some of the best bass you will ever hear. A servo controlled sealed sub from Rythmik Audio will also fit the bill. Beyond that sealed box subwoofers from REL or SVS should be able to keep up with the Z84.