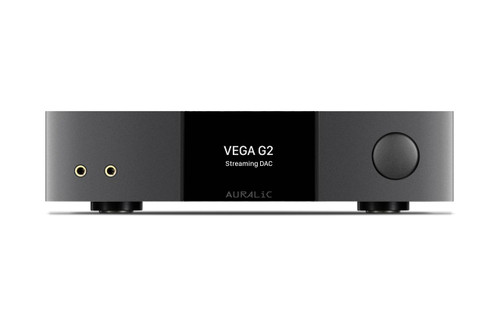 ' As the track played through the VEGA G2, three things caught my ear: the brilliant purity and richness of the tonal colours of each of the instruments in play, the dead-accurate rendering of the dynamic envelopes of the instruments (and especially of their distinctive attack and decay characteristics), and—once again—the striking three-dimensionality of the overall presentation.

' AURALiC’s VEGA G2 represents a big sonic step forward from the firm’s well-respected VEGA Digital Audio Processor and it also is one of the most beautiful sounding and accomplished DACs I’ve ever had the pleasure of using in my reference system. For this reason and more, the VEGA G2 is thoughtfully and enthusiastically recommended.' - Hi-Fi+ 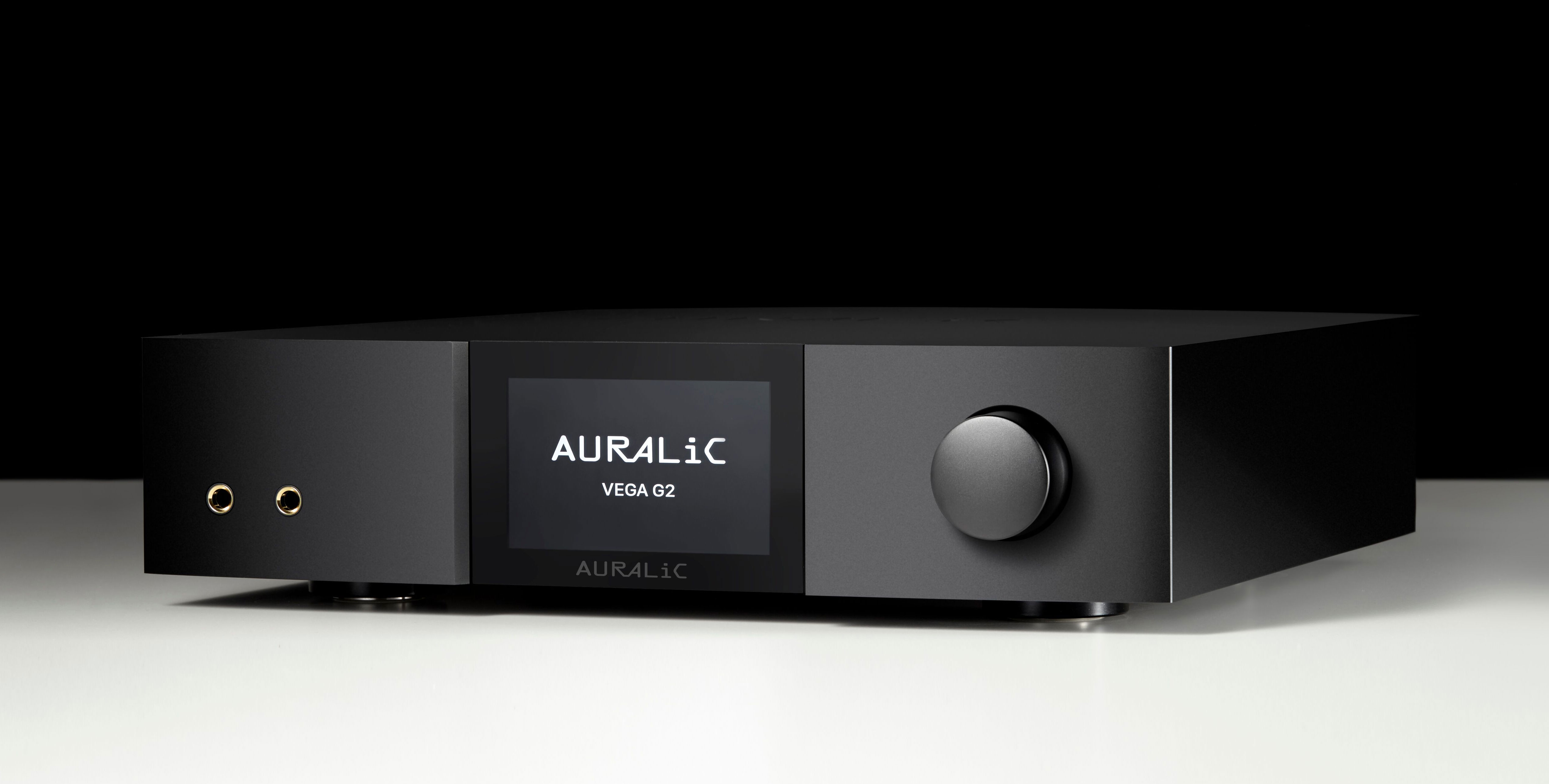 For many, the original VEGA Digital Audio Processor was a reference DAC that performed beyond its accessible price. Now, the brand-new VEGA G2 Streaming DAC benefits from continued research and development at AURALiC to incorporate cutting-edge transfer protocols, enhanced isolation engineering, a redesigned chassis and much more, all while preserving beloved elements like our ORFEO output module. The result is a totally new Streaming DAC that sets a new standard while achieving the level of musicality that is a hallmark of AURALiC products. 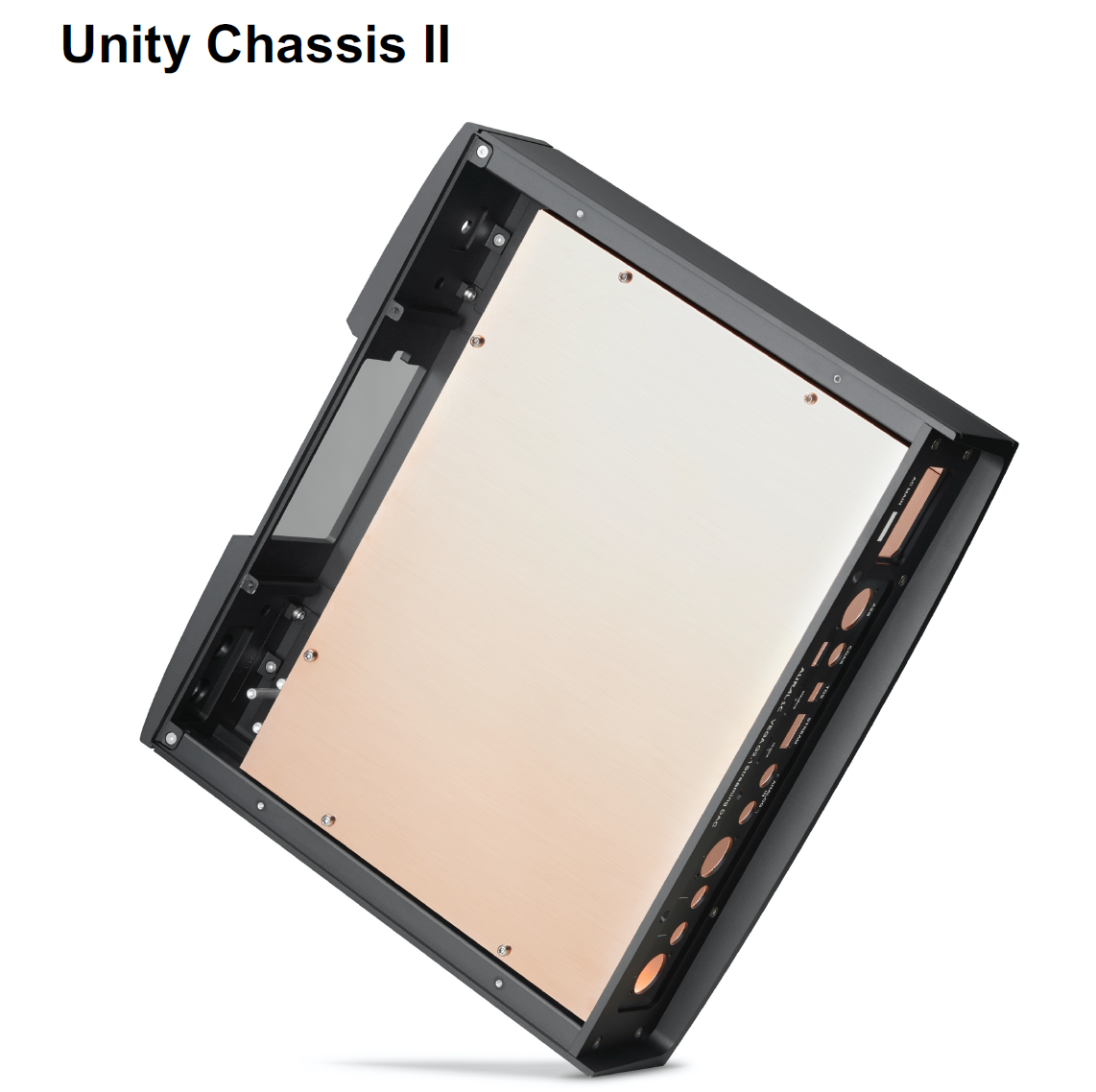 The G2.1 Series casework now features a double enclosure, or “chassis-within-a-chassis,” where the outer casework is manufactured from high-grade aluminum and an additional internal enclosure is made from copper. These design revisions enhance EMI shielding, providing an audible improvement to performance. A new, sculpted metal base provides a highmass, heavyweight foundation for the G2.1/GX.1 series, bonded to the enhanced four-foot assembly. This substantial base adds overall mass to the product and further builds on AURALiC’s modest elegance and improves the sound of the product overall.

The balanced weight distribution design found internally in the original G2/GX layout remains unchanged, but a newly designed suspension spike system further isolates the product from external mechanical vibration. Potentially harmful vibrations are absorbed within the six-coiled-spring, acoustically calibrated core of each foot, with each spring tuned to a different tension point, resulting in greater sound clarity and a more open sound field through vibration damping at separate frequencies, yet again providing for enhanced sonic performance.

While external changes to the series are certainly welcome, internal circuitry modification couldn’t be ignored. For the ARIES G2.1, the USB output has been
transformed into a more universal category of application, allowing for a broad level of compatibility across most manufacturers’ USB inputs. The HDD port, for local hard drive connectivity, has been given a power boost to handle a broad range of USB drives requiring higher power delivery. These optimizations have extended the potential feature sets of the products.

The AURALiC VEGA G2.1 takes everything that made the original VEGA a standout while representing something entirely new. Original engineering designs focused on isolation and separation guard against the slightest attack on sound quality. Cutting-edge technologies and proprietary innovations offer expanded functionality and ultimate integration with the G Series family of products. If you’re looking for the next reference DAC that demonstrates the future of integrated musical data processing that maintains an impeccable dedication to quality, look no further than the VEGA G2.1.

Like all streaming-capable AURALiC products, the VEGA G2.1’s expansive functionality and connectivity options are thanks to its native integration of AURALiC’s custom-built Lightning Streaming technology. Lightning Streaming uses your existing network to create a dedicated music streaming environment capable of processing and streaming the highest resolution musical formats available, including DSD512 and PCM 32bit/384k. Lightning Streaming brings with it all the audio network functionality you’ve come to expect from AURALiC devices too, like Gapless Playback, Memory Caching, Bit-Perfect Multi-Room, and Upsampling. Along with the VEGA G2.1 and the G series of products from AURALiC, we’re also introducing a browser-based interface for configuring Lightning Streaming and its features, allowing universal access for the first time from any smart phone, tablet, or computer. In addition to compatibility with AirPlay, the VEGA G2.1 is a certified Roon Ready endpoint for seamless integration with Roon software, adding yet another element to its flexibility. When working together with the AURALiC ARIES G2.1 and other G2.1 series products, such as SIRIUS and LEO, the VEGA G2.1’s incredible power and tightly synchronized functionality elevates your setup to a cutting-edge streaming digital audio system.

Lightning Link is a low-jitter, bi-directional 18Gbps coupling that takes advantage of highspeed HDMI-type hardware connectors to provide a superior level of transmission control, making today’s ultra-high resolution digital music shine like never before. Different from the I2S standard, the bi-directional Lightning Link opens the door to jitter-free operation of all the devices in your system. Clocking information from destination devices such as the VEGA G2.1 can drive the ARIES G2.1 timing for example, providing perfect data synchronization. Lightning Link also carries system control data for everything from volume control to processor engine setup, allowing all linked AURALiC devices to appear in a single, unified control interface.

AURALiC has contracted with AudioQuest to offer AudioQuest's Diamond HDMI cableas an option. This 1 meter high performance HDMI cable is a great match with the Auralic Aries and Vega G2.1. 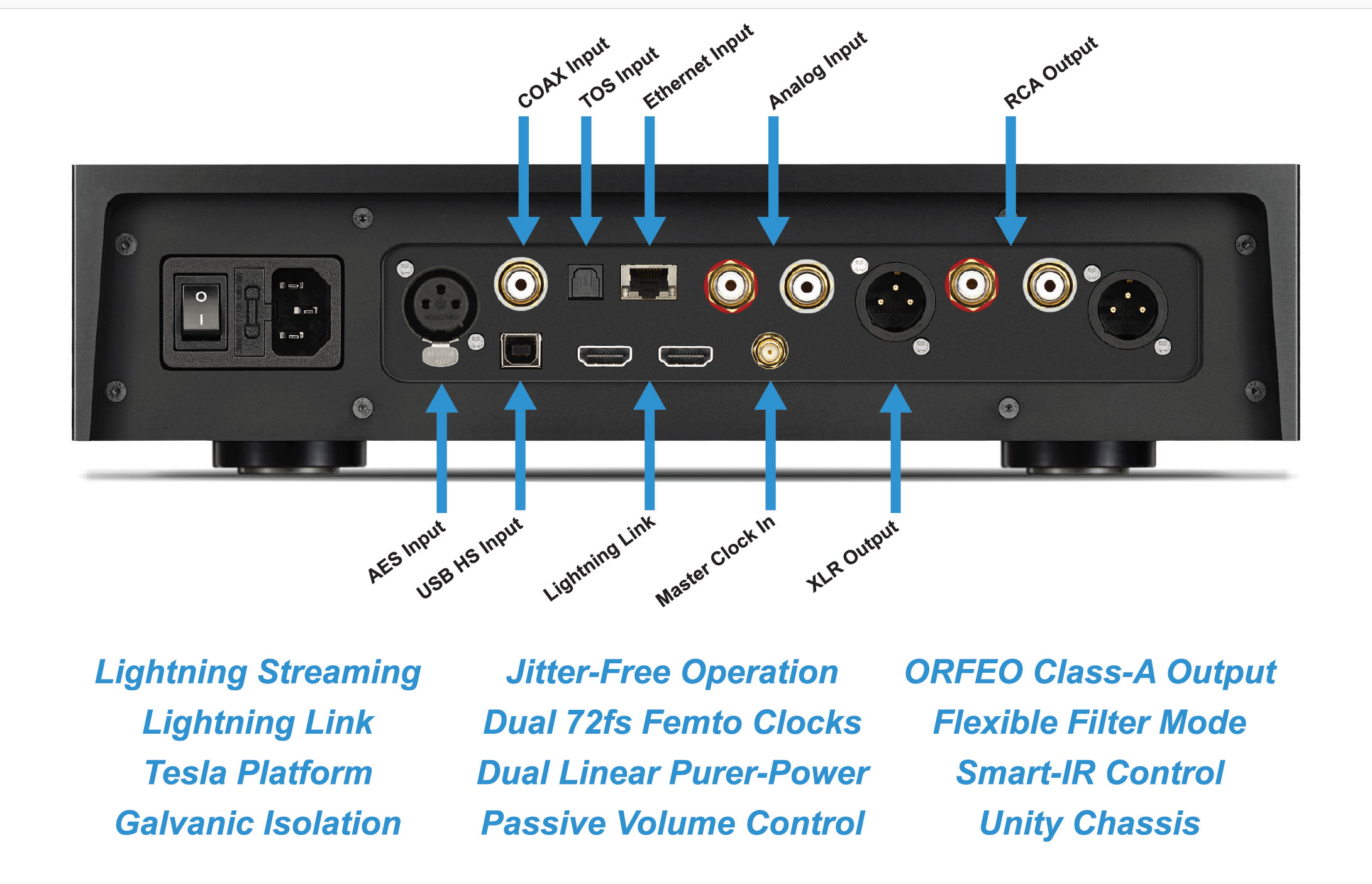 The AURALiC Tesla Platform is at the heart of the VEGA G2.1’s processing power. Built around a Quad-Core A9 chip, with 1GB DDR3 memory and 4GB of storage, the VEGA G2.1 runs at a whopping 25,000 MIPS – 25 times faster than the processor found in the original VEGA. That allows for the introduction of more sophisticated filter algorithms and oversampling techniques than ever before. As always, automatic updates keep the VEGA G2 up to date with the latest feature set and support, continually expanding its functionality and ensuring peak performance.

We’ve built the VEGA G2.1 with two incredibly precise clocks for amazing accuracy. One clock handles sampling of formats in multiples of 44.1kHz, and the second takes care of 48kHz (and multiples) files. They’re the most sophisticated clocks we’ve ever built, and function on 72 femtosecond cycles – 72 quadrillionths of a second. The result is less jitter and immaculate sound.

The 72fs Femto Master Clock is just as quiet as it is accurate, with an extremely low -169dBc/ Hz of phase noise and a 100Hz offset noise level of only -118dBc/Hz, thanks in part to its low noise 3uV dedicated power supply.

The union of AURALiC’s Lightning OS, the Tesla Platform and our 72fs Femto Master Clock leads to a new trick hiding up the VEGA G2.1’s sleeve: it’s a DAC that’s always in charge. While DACs until now have relied on DPLL circuitry to lock on to the input signal’s frequency, the VEGA G2 has no such limitation – a first in the audio industry.

Lightning OS takes full advantage of the Tesla Platform’s considerable resources by buffering enough data to make the input signal’s frequency irrelevant, allowing the VEGA G2.1 to govern all processing with that super-accurate 72fs Femto Master Clock. It’s a configurable setting too, from 0.1s to 1s, so a smaller buffer size may be set for higher quality sources.

Years of development at AURALiC have resulted in yet another brand-new feature appearing in the VEGA G2.1 – a high-performance, low power, fully passive volume control. The fact that most relays need to draw power whether their status is ‘closed’ or ‘open’ is not only inefficient, but their always-energized coils also generate significant levels of EMI noise, adversely affecting sound quality. The eight coil-latch relays driving the VEGA G2.1’s R-2R resistor ladder attenuator network draw no current once set. That fully passive, zero-current system means…zero noise. It’s an expensive solution to construct, but when the goal is precise control and uncompromised sound quality, it’s worth every penny. 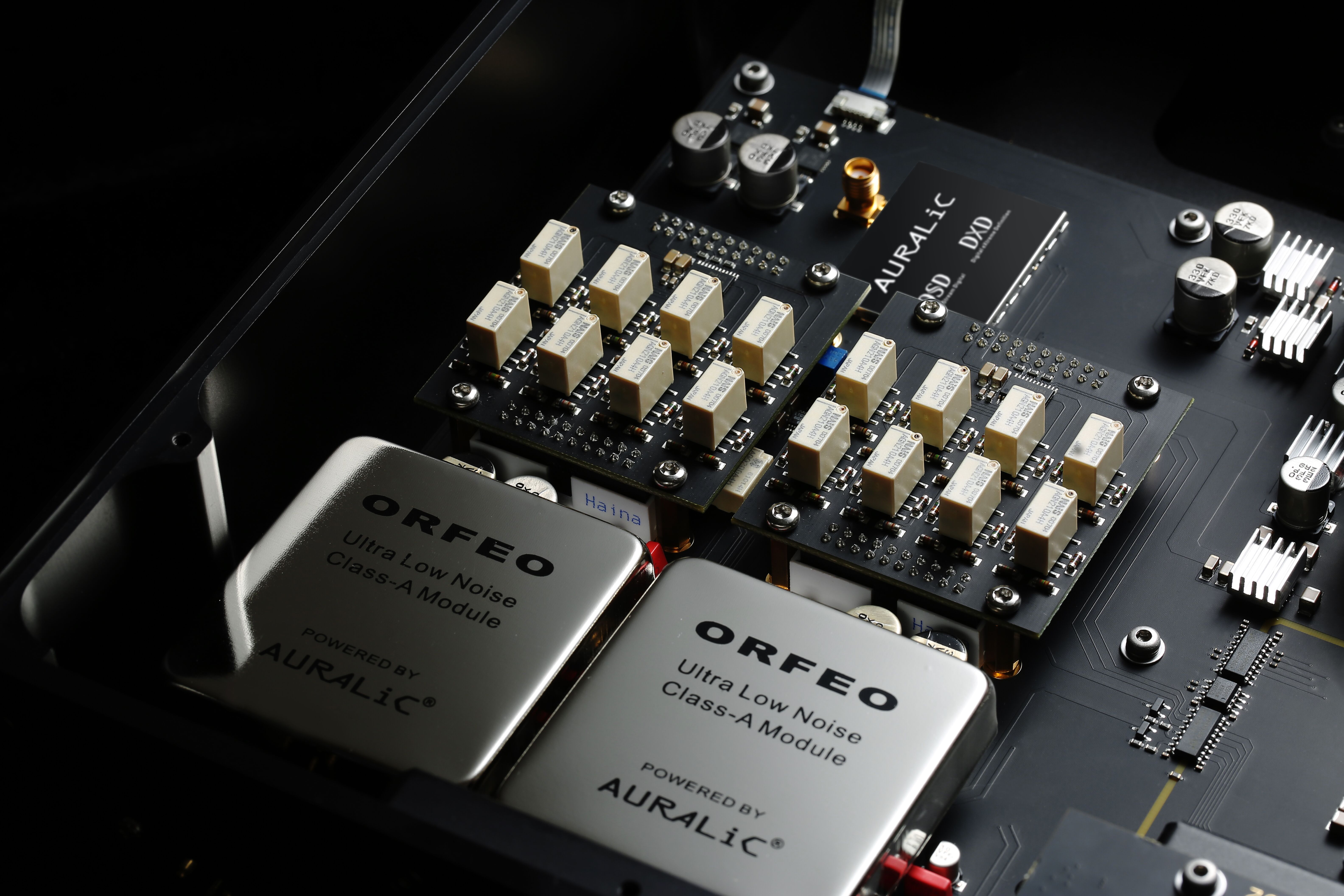 Inspired by the classic Neve 8078 analog console circuit design, the ORFEO Class-A Output Module found in the VEGA G2.1 is capable of driving various loads, matching the characteristics of different power amplifiers. ORFEO uses small signal components with excellent linear characteristics, thermally balanced and biased into Class-A to achieve open loop distortion of less than 0.001%. In the VEGA G2.1, ORFEO has been optimized for lower noise while maintaining the ability to drive 600ohm loads without increasing distortion. 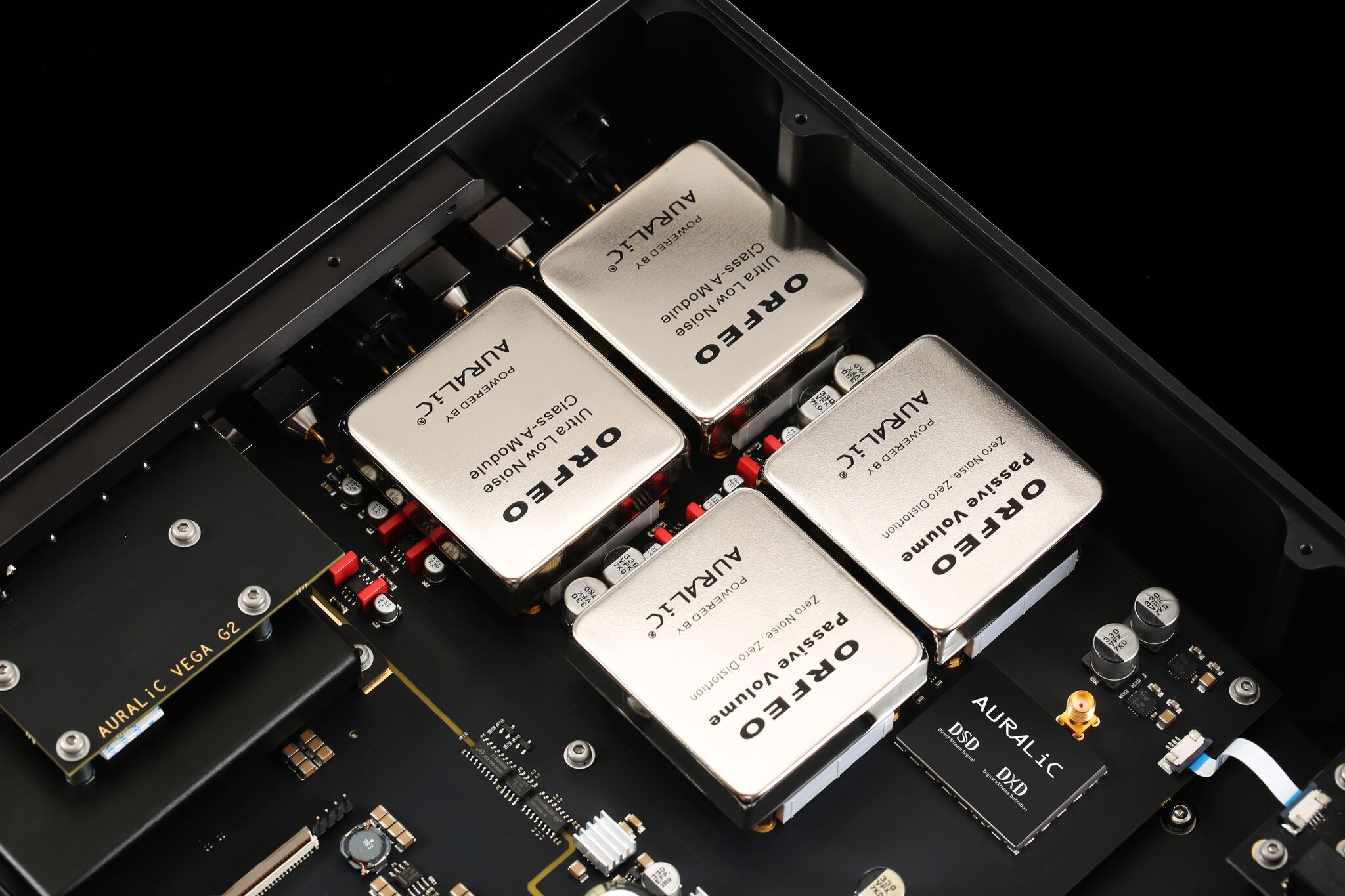 AURALiC’s Purer-Power technology already re-examined every detail of power delivery with innovative wiring and circuit designs based on the concepts of isolation and purification. The ARIES G2 takes that approach a step further by including two internal Purer-Power linear power supplies, separating and protecting distinct power circuits from interference. The first Purer-Power supply feeds the VEGA G2’s processing circuit, LCD display, and network interface. The second Purer-Power pathway is dedicated to sensitive audio components such as the D/A converter, the Femto clock, and the analog circuit. Both power supplies are galvanically isolated from each other to ensure zero EMI interference between them. 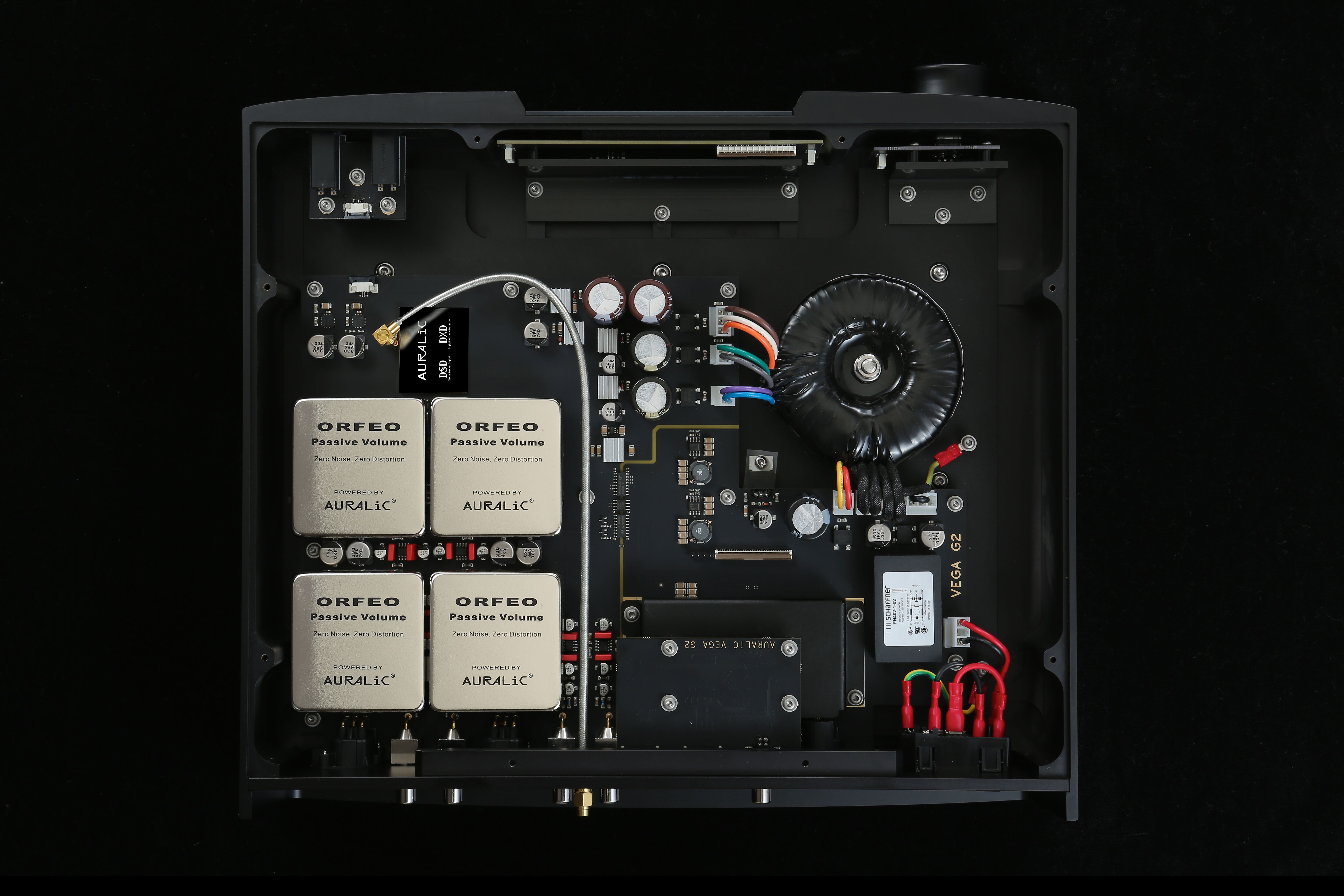 The VEGA G2 is housed in a completely redesigned enclosure – the Unity Chassis. It’s machined from a single billet of aluminum and specifically designed for the premium lineup of AURALiC G Series products, right down to mass balancing and the shape of its foot spikes. The Unity Chassis excels at shielding the inner workings of the VEGA G2 from EMI and providing superior dampening and absorption, reflecting the obsessive attention to noise reduction throughout the G Series.

The 2nd generation of AURALiC’s Flexible Filter Mode makes an appearance in the VEGA G2 for a nuanced level of user-selected control over audio output. It includes four filter modes developed using a combination of objective data models and subjective testing, with each mode assembling a unique array of filters to match the sonic qualities of the source. Precise Mode maximizes in-band ripple and out-band attenuation performance for example, while Smooth Mode eliminates pre-ringing. Dynamic and Balance Modes round out the available options that provide an extra level of control for your listening.