The final parts arrived, and the time to complete the frames, install the drivers etc. had arrived. Assembly was pretty easy, I do wonder however if I needed 2 cross braces between the masts, as the wood baffles act as cross braces. I liked the one across the top as it gives the speaker a more finished look. 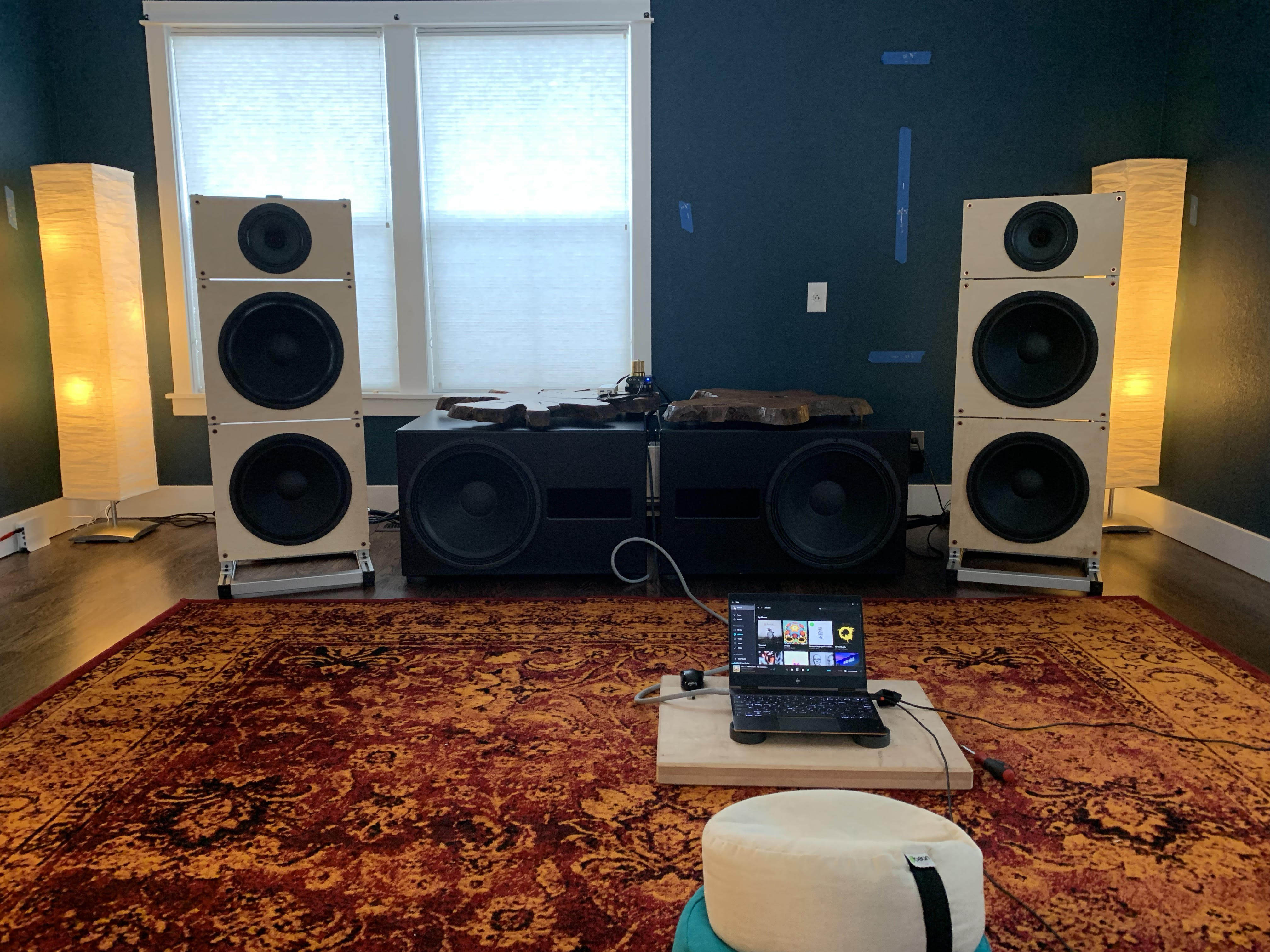 Wiring was super easy as well since there are no passive crossovers. I wired the 8 ohm woofers in parallel, the 4 connection terminals on the woofers made this easy. I used Duelund 16 awg "Tone" wire for all drivers, starting with just a single run for each + and -. I will experiment later with doubling and perhaps even tripling up on the wire because it makes quite a difference when making speaker cable out of the Duelund 16 AWG. 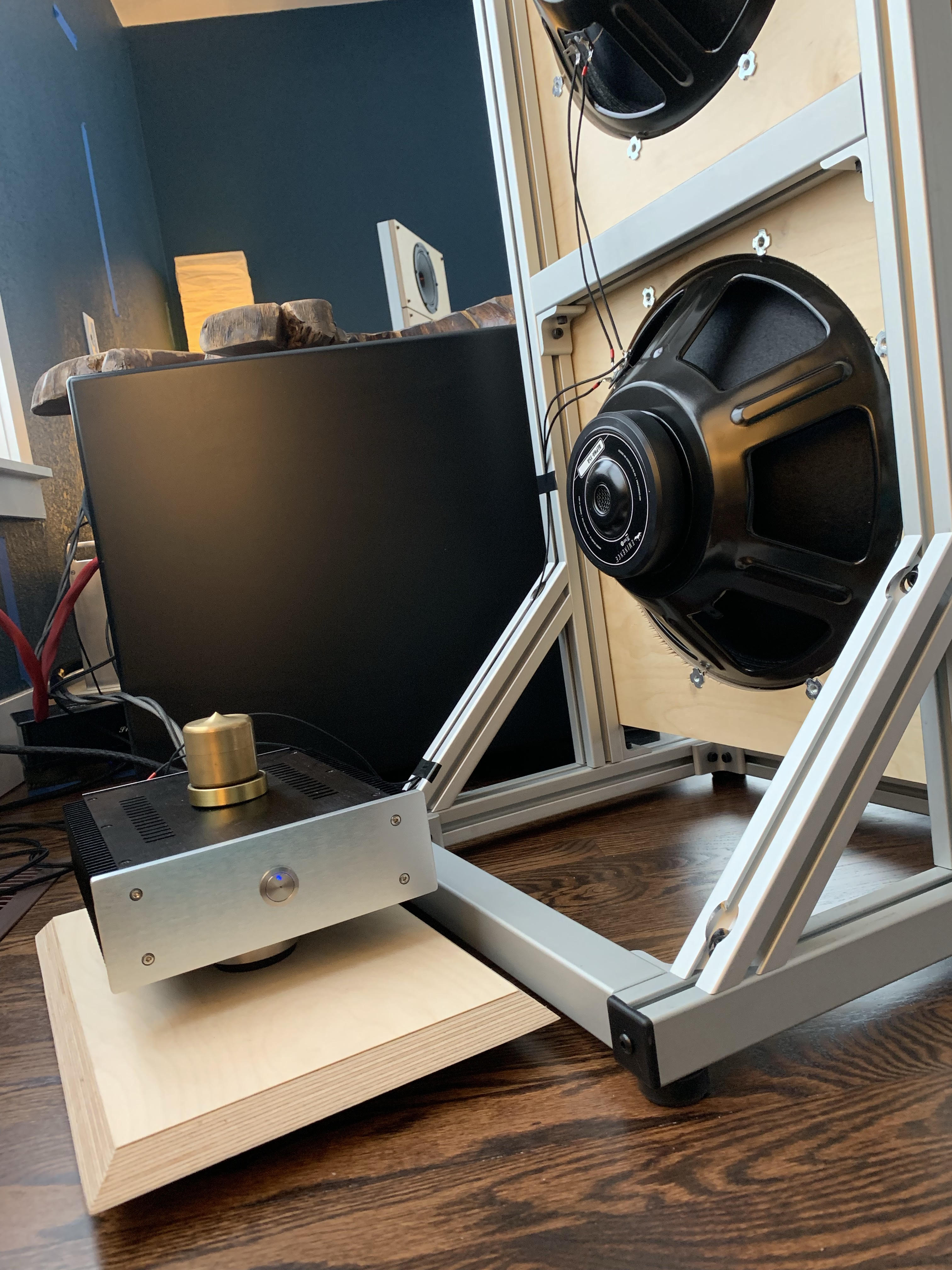 The amps are a secret. Two channels in one box. Even un-tweaked, they sound better than the Acoustic Imagery, and the best part is they never get much beyond room temperature. 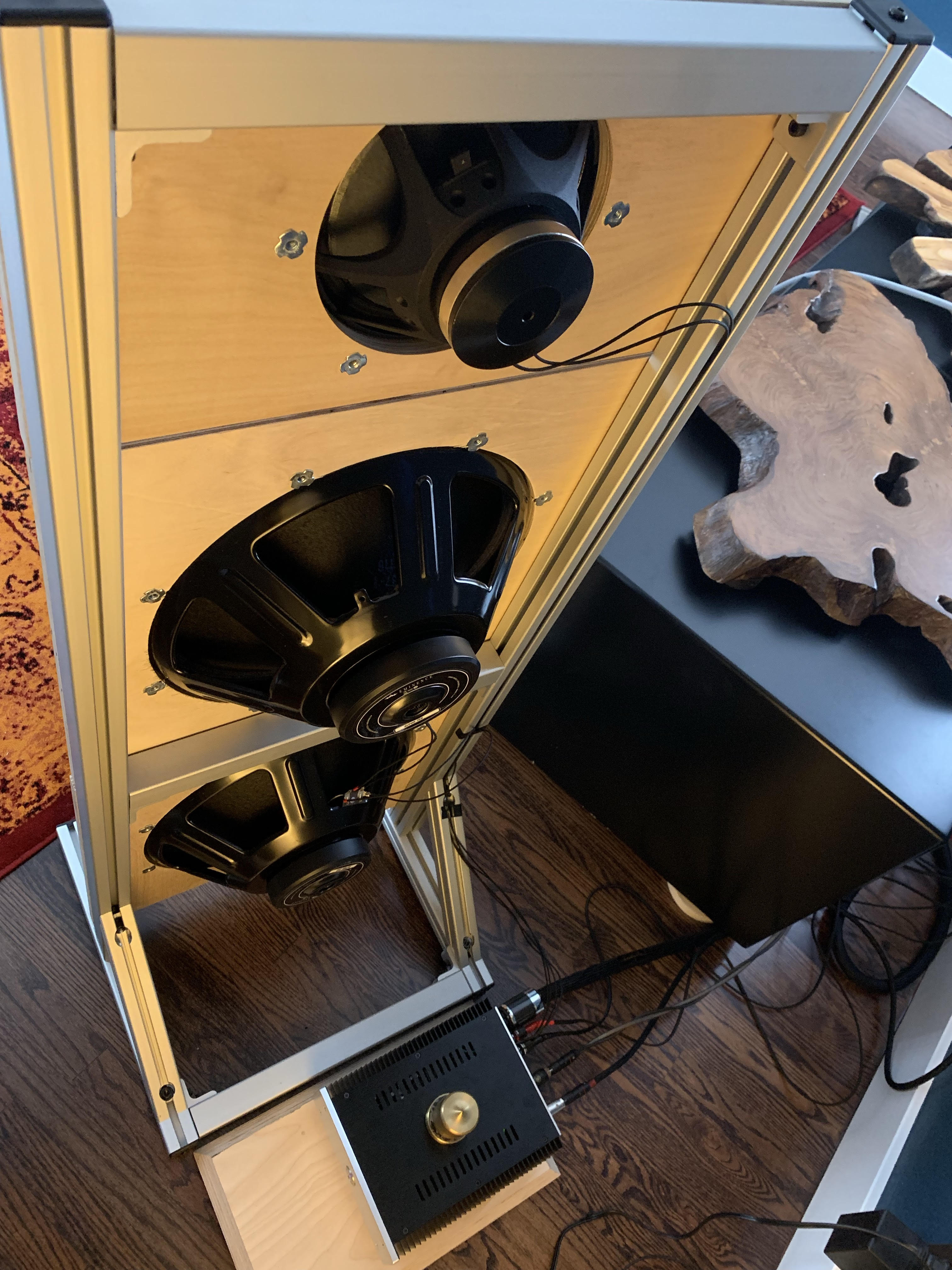 At first, I wanted the big drivers to play higher up into the frequency range, with a shallow first order slope. I have had experiences before where this really helps the drivers to integrate better. I started with 300hz as the crossover point for the Eminence drivers, and 300hz for the full range. A lot of overlap.

The first measurements were actually pretty good. It was obvious however that there was too much overlap. The bump in the 300 hz range was a strong indicator of that. 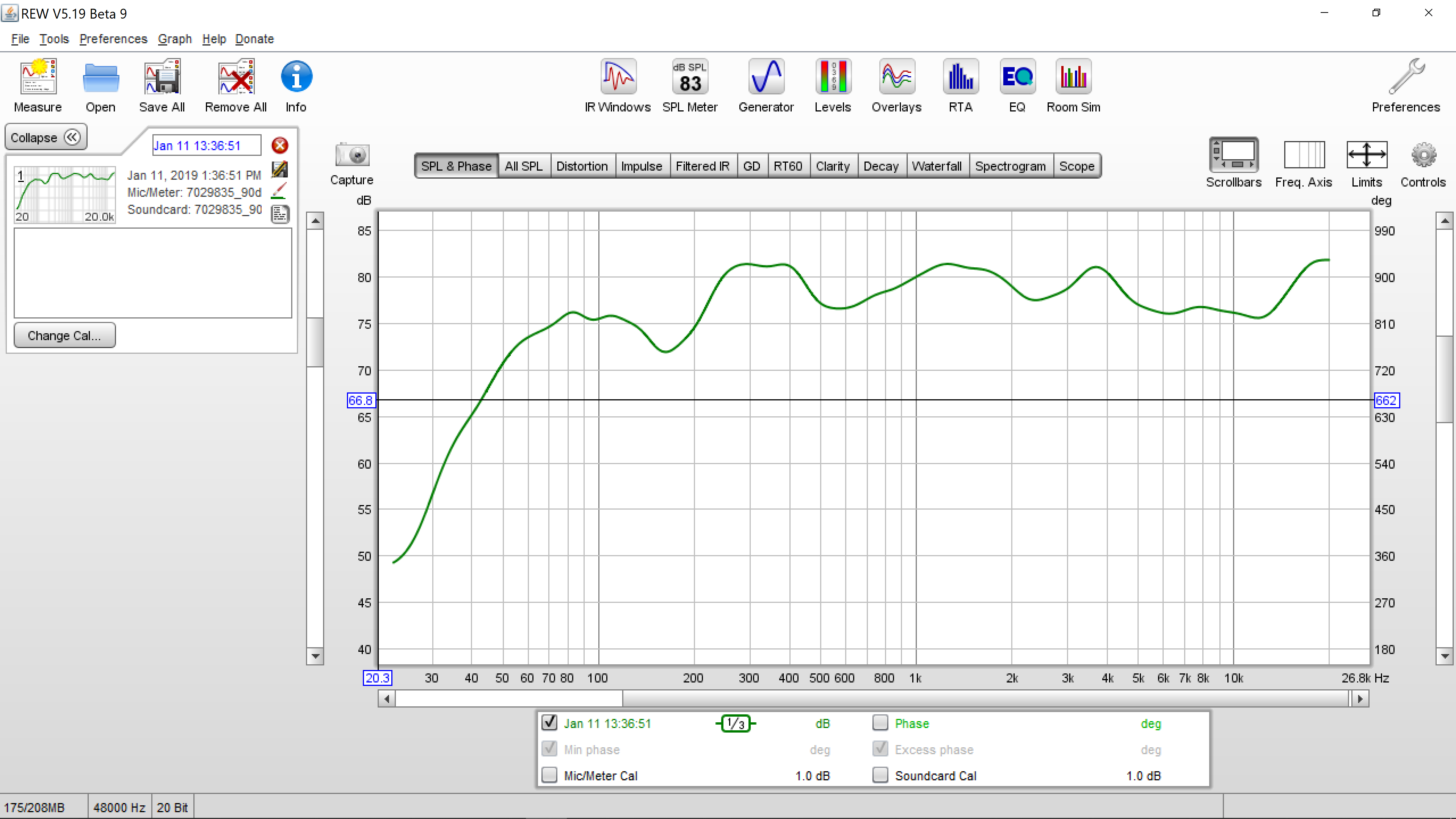 For the sake of experiment, I went ahead with this crossover point anyhow and proceeded to do EQ. Mostly because I was excited to hear something from these speakers.

I quick entered the frequencies, boosts/cuts, and Q's (EQ Curve Widths) and listened. It didn't suck. What happened over time though was I felt there was too much bloom in the low mids. It created a great sense of presence at times with the big drivers contributing, but vocals were boomy at times, and the sense of air and space was diminished.

Someone on the Facebook DIY Open Baffle forum suggested a crossover point of 200Hz for the Eminence drivers, so I went with that, and I also went with a 150hz crossover on the full range driver. This sounds crazy and counter intuitive, and it may very well be, but for now I felt the drivers blended well.

Below is the L and R channels with no EQ. 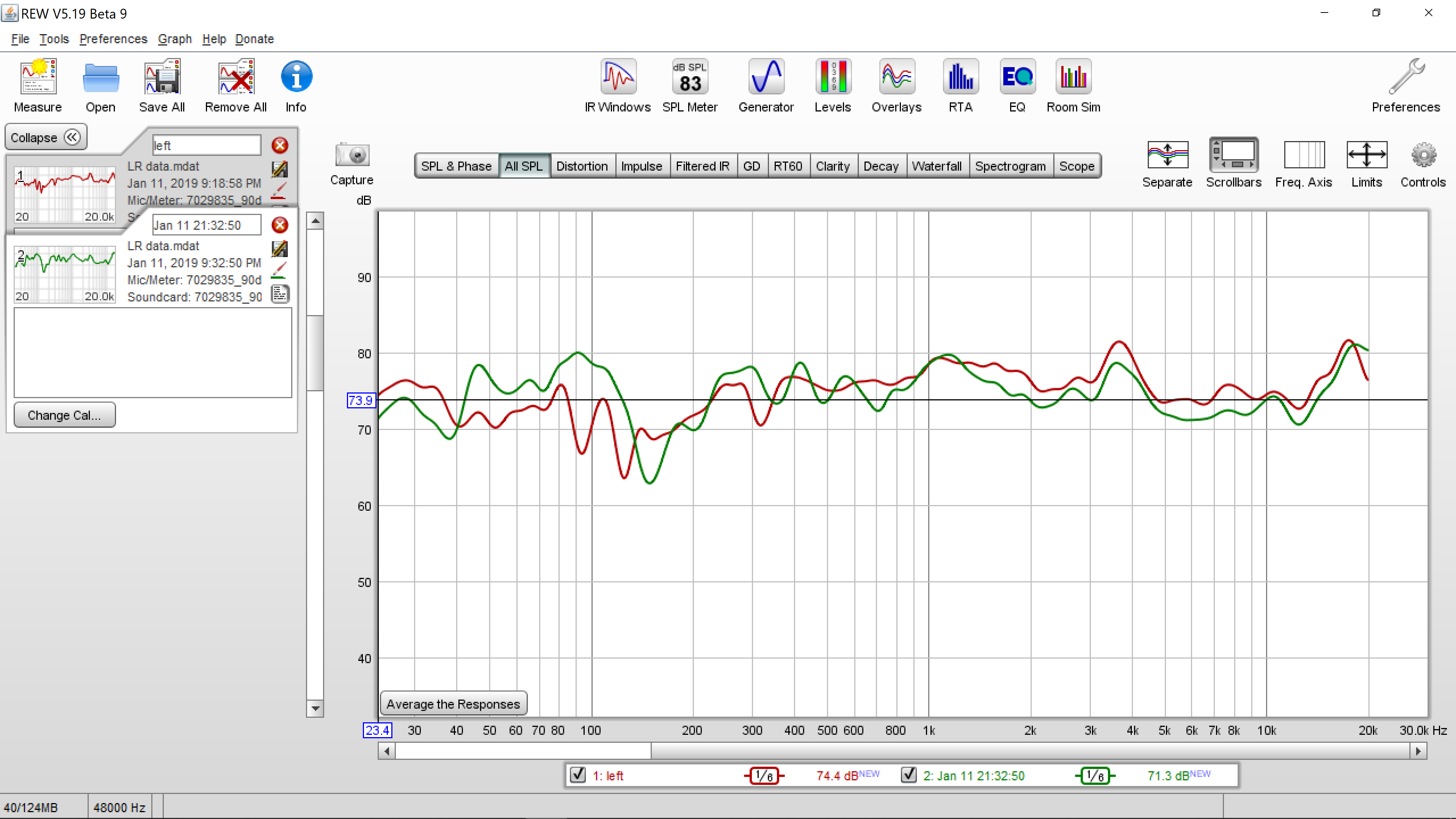 I think the fact that there is a room node centered around 180 hz might have made my choice of crossover points less of a factor in this case. It would be interesting to see if this holds true for other rooms.

I was very happy with the sound. It was more natural, less boomy and there was more air and space. Open baffle speakers have a fantastic, boxless quality to the lower frequencies and midrange that I find appealing. Being highly efficient is another plust as they are easy to drive and the sensitivity seems to add to the dynamic punch factor. I am going to live with this for awhile to see if it bugs me over time. I still need to receive my acoustic treatments, and the full range driver needs to break in. I have been told 300 hours. Good thing I have a separate building and can run these 24-7.