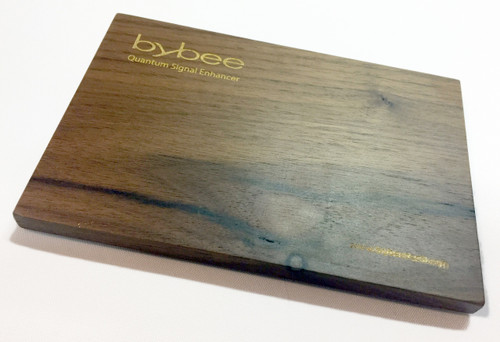 This new wooden version of the Bybee Quantum Signal Enhancer replaces the popular black acrylic model.  Like the original model, this QSE is activated by surrounding electromagnetic energy, but has also been designed and engineered to be more effective by creating an extended electric and magnetic field.  Once activated, the extended electric and magnetic fields affects the polarity of all electrons and protons in close proximity; affecting their oscillation by making them more aligned with each other.  This reaction creates an affect that makes the transfer or sharing of electrons between atoms more streamlined and efficient.  The results are a stunningly enhanced purity and energy of the video or audio signal. Of note, the active elements inside the QSE are specially formed crystals that are resistant to damage and will never lose their effectiveness.

"What you will hear if you are patient is sound that is grain and noise free with enhanced transparency. A wide open and seamless sound filled the space between my Wilson MAX II speakers as never before. Not only that, musical forces became incrementally more tactile and immediate. Joni Mitchell’s vocals on her seminal Blue album took(all referenced music is via LPs) on a more tangible, three dimensional quality, as did Stephen Still’s distinctive guitar. Mitchell’s vocals were brought into greater relief and the QSE made it obvious that she overdubbed her own background vocals on “Cary”, whereas before her vocals were slightly indistinct and homogenized. I heard the same immediacy playing Nick Drake’s Pink Moon, Norah Jones’’ Come Away with Me, and the Weavers Reunion at Carnegie Hall, to name just a few. To be clear, by immediacy, I mean a sense of abiding presence coupled with a slight projection of images." - StereoMojo Review

"I decided to add these Enhancers one at a time to my system which was already tweaked out with an arsenal of devices like the Stein Harmonizers, Novum Resonators, IPC Energizers, Shakti Stones and Hallographs, Bybee Speaker Bullets and more. I chose to begin my experiment with 5 Enhancers which I felt was a reasonable number and would show their capabilities.

I put my first Bybee Enhancer under my PS Audio DSD DAC. The Enhancer created a noticeable  improvement to the sound that went way beyond its $119 asking price. I put the second one under my Wells Audio Innamorata stereo amplifier. And again, I heard an increase in musicality and image clarity with less grain and more natural harmonics." - StereoTimes Review of the Quantum Signal Enhancers

How to use the Quantum Signal Enhancer

Tip: the QSE's take time to settle in. They may at first sound a little muted or accentuate upper midband frequencies. They tend to settle in after 12 hours or so.

The Bybee QSE is typically placed under/over any kind of power cord or signal cable.  It can be used on televisions, computers, audio equipment; medical equipment or any other source.  It is also highly effective when used under/over audio and video components such as CD or DVD players, preamplifiers and amplifiers. It can be placed in any position, and direction of face is not important.  The QSE does not necessariy need to be in direct contact with a component to be effective. Also, the plastic packaging, if left in place, does not have an effect on the performance.

The QSE is activated by all forms of surrounding energy.  For that reason, the QSE works best when in close proximity to power cords, components, or any other source. This flexibility means that one QSE may be used with multiple cords and/or cables.

The benefits of the Bybee Quantum Signal Enhancer are cumulative. The more signal enhancers used in a given environment, the more noticeable the benefits will be.

What You Will See and Hear

In audio systems the Bybee Signal Enhancers are effective under power cords, interconnects and speaker cables as well as under or on top of audio components. Bass frequencies are faster and more impactful. High frequencies become more extended, open and natural without edginess. The critical midrange sounds more musical, more liquid and less "electronic". The overall presentation of imaging and soundstaging becomes both more precise and more enveloping - the listening environment delivers a much more persuasive "you are there" experience.

Contact us to audition the Bybee Quantum Signal Enhancers today by emailing us, or calling 888-998-9335. We can lend out up to two, for a period of 7 days. If that's not long enough or you would like to audition more than two at a time, we still back our products with a 30-day money back guarantee.

Q: I have Bybee Quantum Purifiers throughout my system, will the AV Enhancers still provide a benefit?

A: YES. The AV Enhancers are completely different from Bybee Quantum Purifiers and work on a different type of noise. The effects are additive and very positive.