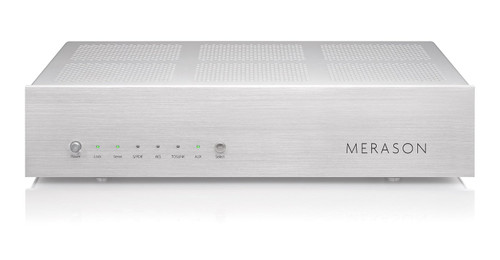 After the success of the DAC 1 from Merason, the designers have revisited and re-designed this already amazing non oversampling DAC, and have taken the performance to the next level.

The structure and routing layout of the PCB was entirely re-designed resulting in a significantly reduced impedance and loss-free power supply delivery to each individual component. In addition, the shielding against external interference was also greatly improved, further lowering the noise floor for even higher resolution.

High precision SMD components are now predominantly used throughout the design due to their superior performance characteristics. Unlike the THT parts previously used, the SMD components offer a far shorter component to conductor path resulting in much lower losses. The capacitors in both low-pass filters now have a dielectric made of polystyrene, a material well proven for high performance audio applications. A shorter, lower resistance and more uniform circuit path and design means higher performance and lower noise.

New in the DAC1 Mk II is a sophisticated mounting procedure of the power transistors to their individual heat sinks using custom designed disc springs. This intricate method allows for a precisely defined contact pressure, achieving optimal temperature equalization of the paired transistors. This application has dramatically reduced harmonic distortion in the signal path. The lower distortion increases detail, transparency and enjoyment factor.

All these measures adapted into the DAC-1 MK2 have led to an even wider and deeper soundstage. The dynamics are clearly greater, with the transient speed and attack reminiscent of live music. Although the measured output level has remained identical, one has the impression that the Mk II plays louder with a much quieter background. Micro/Macro details are resolved more distinctly, with new details emerging from familiar recordings that were not previously recognizable. The sound image has become even airier and lighter, with bass now much more weighted and defined. All in all, a converter that plays in a higher league!!