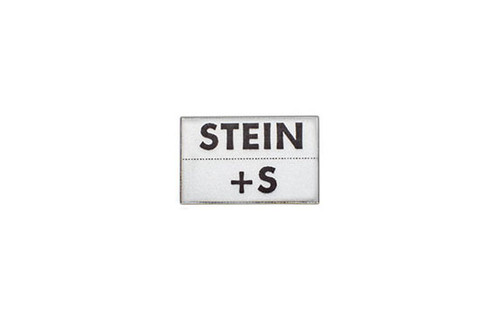 "Wow! What the hell is in a Stein E-pad S+? Such a huge improvement from such a little tweak. Added 1 to the tray of my Oppo 103D and audio and video Valhalla. If I could afford it, I would buy a dozen more. My Viking funeral is now complete." - Jim.

Steinmusic E-Pads are small 8 x 155 mm self-adhesive rectangles that when placed properly have a transformative impact on the music. An impact that goes well beyond their diminutive size.

Used by itself, or in combination with the E-Pad 11, 22, or 33, the E-Pad+S will lower the noise floor of your system, and improve the flow and organic nature of the music being played through your audio system. Making the music more emotionally involving with increased clarity.

E-Pads operate at the level of molecular interaction producing profound and measurable changes to both the mechanical and electrical properties of materials. These properties include a material's spectrum of resonances, torsion force and modulus of elasticity as well as electrical conductivity by reducing electical "smog" and interferance fields.

The performance of Steinmusic E-Pads greatly transcends what would be achievable with regular forms of resonance damping. This allows a very broad range of applications since both mechanical and electrical properties are influenced similarly.

CD- players
Stick the E-pad +S into the tray namely into the normally existing recess for placing Mini-CDs. If you own a top-loading player, please process similarly and bond the E-pad at an appropriate place with an orientation parallel to the CD. That may be at the bottom or at the top cover.

Amplifier
At amplifiers the back plate suggests itself for fixing one or more E-Pads: It is exactly the place where all inputs and outputs meet. The first trail should be one pad close to the mains input but placing close to input or output connectors will benefit, too.

Record Players
Try an E-pad +S at the base of the tone arm.

Loudspeakers
One E-pad +S near the binding posts is effective with loudspeakers which have their crossovers located there. Additionally it has been proven to place one E-pad at the front exactly between the individual dirver frames in the case of multi-way speakers. If you use horn-speakers it is worth a trial to place one E-pad each at the mid- and high-frequency horn. Further E-pads at the enclosure help to minimize unwanted resonances. Trial and error is the way to find the correct place here.

Headphones
One E-pad +S fixed at each ear cup at the upper side close to the yoke considerably improves the fidelity of reproduction.

Electric meter / electric distribution
One or two E-pad +S stuck from outside onto the electric panel work wonders. Further applications are directly at the electric meter, at the ground-fault circuit interrupter and at the fuses. Of course, a good place is directly at the power supply socket which is feeding the whole variety of audio equipment, or at the mains plug board where the power supply cable is fed in. At components like CD-players and amplifiers the area where the mains are supplied is a good position for the application of E-pad +S. Windows and Glass-doors Windows do create extremely undesirable reflections which do distract from the pleasure of listening to music. One E-pad +S placed unobtrusively at a corner of the window-glass will repair a lot. The same is valid for glassy picture frames, glassy tables and mirrors. Screens are to be treated the same way as other areas made of glass concerning their acoustic properties. The positive effects onto the acoustics are obvious. Furthermore one E-pad +S stuck into one corner often causes a more quiet, more stable and more colour-intensive picture. This is valid for computer monitors as well as for TV-sets of all kind. Please try. Very obvious improvements concerning sharpness and intensity of colour can be reached with just one E-pad +S at the plug of the video-recorder or the HDMI-cable at the monitor or projector. Steinmusic Harmonizer Even there a reproducible improvement will occur if you stick one E-pad +S to the bottom side of a Harmonizer.